During the war, many people left their homes, fleeing to other countries or into hiding,

Impact on Children
Parents faced the decision of whether or not they were going to flee the country or hide their children. Children were much easier to hide, because they were not required to carry any identification with them. 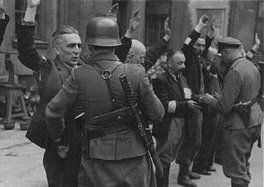 Poland, May 1943. German soldiers arresting Jewish rebels.
Life in Ghettos
A ghetto is an isolated section of a city that is designated for a specific group of people that are forced to live in that area. The ghettos were horrible and unhealthy. They were cramped, dirty and had little food. Jews were forced to wear Star of David bands on their coat sleeves. There were curfews and guards on duty at all times to make sure the Jews did not cross over to non-Jewish sides. While in these ghettos, the Jews secretly prayed, conducted religious services, set up schools, put on plays, and wrote diaries in the ghettos. The ghettos often got smaller after much of the population died. Since they lived in such close quarters, disease was able to be spread much quicker, and it was hard to stay healthy. The sewer systems were also not very good, and so people would have to deal with feces and urine on the streets. 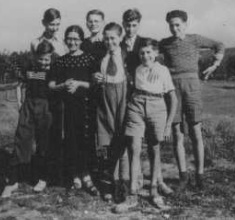 Life With Other Families
Jewish children were either placed with another family, to be hidden, or they were hidden with their parents in a secret room. Some families the children stayed with were very nice, but others were not. Some children were sent to farms, hotels or ministries. Children had to be able to adapt to their new family, until the war was over, only then could they re-unite with their families. However, the children were not always informed of this arrangement and if they were very young when they went into hiding, they may have no memories of the life they had before. Their Jewish identity, by that time had been replaced, and they were now Christian, or whichever faith their new families practiced. When the war ended, it was hard for the surrogate family to give up the child, because they had raise him or her, and these bonds were hard to break. The child had a hard time adapting back to their old life with a family that they hardly remembered.
Powered by