how the past can help the future

Taking a look at the Holocaust, one can see that the Jews suffered through massive heart ache. In concentration camps, they were starved, worked to death, put on death marches, they had to watch their loved ones die, some even worked with putting bodies into the furnace. Outside of concentration camps, they were looked down upon and were made out to be the cause of Germany's downfall.

Looking at this massive genocide, hopefully the future can learn from Germany's mistake and learn more tolerance for those who are different. Hopefully the UN will not allow another dictator to take over and re-create something similar to the Holocaust. The past has taught the present what intolerance can lead to, massive deaths, segregation, and injustice. The people of today can learn from the past and learn to not to keep silent, but instead, stand up for what they believe is right. This is how the world will make a leap forward. With every new thing learned, the sign turns more and more, that is the reason as to why the past and present are pointing in different directions. Together, the world could make a 180 degree turn and be different from the past by learning from the past mistakes made by other people. 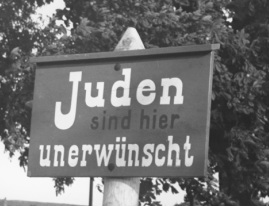 This sign translates to: Jews are not wanted here.
Although the world as a whole has made progress towards tolerance and acceptance, there are still those who do not accept others, or tolerate those who are different. Even though it has been approximately 68-years since the Holocaust, those 68-years is not enough time to overcome segregation and the hatred of those who are different. To this day, there are still those who resent the Jews, because of the belief that they are sinners and they deserved to go through the Holocaust ordeal.
Powered by